This website was updated on 3rd December 2021, with details of the recommendations of the recent landmark report by Prof Kate Warner, Prof Tim McCormack and Ms Fauve Kurnadi.

kooparoona niara (Great Western Tiers) includes the imposing northern and eastern escarpment of the extensive Central Plateau of Tasmania.  The area is usually taken to include both adjoining parts of the plateau (especially the part readily accessible by day walks) and the forested lower slopes, which are mostly in public ownership – with high conservation values.

The First People have inhabited and moved through the area for many thousands of years.  The present-day Aboriginal community has strong cultural links with the landscape, giving it the name kooparoona niara – the Mountains of the Spirits. The area is rich in globally significant Aboriginal heritage.

The Tasmanian Aboriginal community has formally requested that the Tasmanian government hand back significant parts as an Aboriginal owned and managed national park. Our group strongly supports this aspiration.

The natural conservation values of the area are described in some detail here.

A national park proposal was first launched by conservationists in 1990 with an extended proposal in 1995. 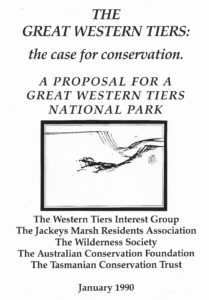 Since then, after many years of campaigning by conservationists to end logging, the area has been given World Heritage status and the Mole Creek Karst National Park has been created on the western end. However, while protected under the IUCN World Heritage conventions, most of the area remains in inappropriate tenures under Tasmanian law.

The Mole Creek karst area at the western end (parts of which have national park status) has a distinctive underground drainage system and includes spectacular, world-class, caves. The Mole Creek Karst National Park has recently been extended.

Meander Valley Council, Northern Tourism Tasmania, the Board of Great Western Tiers Tourism Association and other stakeholders are currently developing a tourism theme for the area based on the numerous short walks in the area – The Short Walks Capital of Tasmania – backed by $500,000 of government funding. There have been improvements in the recognition of Aboriginal culture within this process since the outset. However, this short walks push needs to align with the Aboriginal owned and managed national park aspiration.

The current approach of the steering committee is to evaluate a selection of 5 tracks for: environmental values; Aboriginal heritage, history and connection; non-Aboriginal heritage; all abilities access and experience; adventure.

Unless sufficient care is taken with track maintenance,  signage, interpretation and visitor facilities, the extra visitation will result in environmental degradation. Many of the tracks lead on to sensitive alpine vegetation. Visitor safety is a concern.

Conservation groups including Friends of the Great Western Tiers kooparoona niara, the Wilderness Society and the Tasmanian National Parks Association have put forward an updated plan for  a kooparoona niara (Great Western Tiers) National Park and extended Mole Creek Karst National Park. This proposal is part of a submission regarding the status of designated Future Potential Production Forest (FPPF) in the World Heritage area. This process is further described below. The submission can be viewed here:

A detailed map showing the areas proposed for national park by conservation groups (Friends of Great Western Tiers kooparoona niara, the Wilderness Society and Tasmanian National Parks Association ) in 2021 can be viewed here:

The conservation groups’ proposal encompasses all the World Heritage listed forested escarpment and adjoining plateau, as well as important areas to the east which are not in World Heritage. The Mole Creek Karst National Park already exists in fragmented form. The conservation groups’ proposal extends this existing national park as well as calling on the remaining areas of the escarpment and adjoining plateau to be given National Park status (kooparoona niara Great Western Tiers National Park). Much of the area is classified by the State Government as Conservation Area, a lesser category which allows resource extraction, contrary to the requirements of World Heritage. Given that most of the proposed area is already World Heritage and thus not available for resource extraction, there should be no impediments to revising the tenure to national park.

Further, the areas shown on the map in blue with crosshatching are currently classified as Future Potential Production Forest (FPPF) with World Heritage status. These areas were given FPPF status after their World Heritage listing. FPPF is not a statutory land classification and the body administering World Heritage, the International Union for Conservation of Nature (IUCN) has recommended that these areas be given national park status. The Tasmania State government wants to make them Conservation Areas, a lesser status which allows resource extraction. In a recent public consultation process, 97% of submissions called for these areas to be made national park. The public submission process was a farce, with the Tasmanian government ignoring the public submissions.

Proposal for an Aboriginal owned and managed National Park:

The areas of Future Potential Production Forest shown on the conservationists’ map are effectively Unallocated Crown Land and it would be administratively straightforward for the Tasmanian Government to hand these back to the Aboriginal community. These areas form the basis of the formal submission by the Aboriginal Lands Council of Tasmania (ALCT) to the State Government for Tasmania’s first Aboriginal owned and managed national park, potentially along with further selected areas of high cultural significance. The conservation groups strongly support this proposal. Further, our group recognises and supports the local Aboriginal community’s need to have a determining role in any developments.

The ALCT submission and media release can be viewed here:

ABC Radio interviews with Rebecca Digney and Darlene Mansell can be heard here:

The conservation groups’ supporting media release can be viewed here:

This report was commissioned by Premier Gutwein and involved extensive conservation with Aboriginal people throughout Tasmania. Of particular interest for kooparoona niara is Recommendation 12: Creation of the kooparoona niara Aboriginal Protected Area

These recommendations are welcome. However, the Aboriginal Protected Area concept may not be the best option. A national park is the preferred approach. It will have greater prestige and be more readily recognised by the general public.

The full report can be accessed here.

Beautifully written, richly  illustrated with superb photos…”explores the interconnections between the landforms, climate, fauna and flora of the region”

The proceeds from sales help support our work.